skip to main | skip to sidebar

Every now and then I'll remember something I played from childhood and get this urge to look it up again. I played the DOS version and got stuck on the part where you have to rescue your pet frog. It was a relatively short game that had its good and bad points, but I enjoyed it in all its quirkiness...

Released in the early 90’s for DOS, this point-and-click game puts the player in control of a bratty nine year old boy obsessed with his Nintari game console and its upcoming competition. Determined to win, he won’t let anything get in his way. 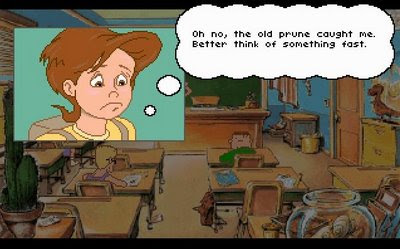 It doesn’t take long to realize that your grades aren’t the only thing threatening your vacation: your dad comes home with news of his recent lay off, meaning there’s no money for your trip to the Nintari championship! What’s a boy to do?

Over the course of four days, Willy will find himself getting into all sorts of mischief in the little town of Frumpton, as well as increasing amounts of danger. Confrontations with various NPC characters can spell a game over, depending on how well you deal with them… or escape. Threats range from ridiculous to life threatening and if you get into too much trouble with your parents they’ll ship you off to military school. Serving as conscious to keep our prankster out of trouble is his ghostly grandpa, who will occasionally appear to either serve as a voice of reason or to warn him of impending doom. There’s also the “Trouble Meter” to show where you are on the discipline scale, which appears when you do good or bad things.

Like any kid, Willy has chores and responsibilities he must fulfill in order to get an allowance. This means mowing the lawn, washing the car, taking care of your dog and whatever else your parents ask of you, including helping your two sisters, Brianna and Tiffany. Neglect your duties too often and it’s the doghouse for you!

The first antagonist you really meet is Spider, a delinquent student who’s in and out of juvenile hall. Willy never fights his opponents directly since he’s weaker and smaller than everyone else. He must use his wits to outsmart them in order to get out of trouble with a peace offering, trickery or manipulating what’s around him. The puzzles tend to take a lot of trial and error, with the solutions sometimes obscure. Items that can be interacted with or picked up have a habit of blending in well with the environment on top of that, so you’ll have to mouse over everything to check. Poor decisions made during the course of the game can also spell unfavorable outcomes because of missed opportunities and, as a result, missed items. It’s advisable to save often, since you can do so anywhere at almost anytime. Also, keep in mind that there’s a hidden timer, so don’t take too long in deciding what to do.

Overall, it was a good game at the time that could please all ages. A lighthearted look, relatable characters and some hidden adult humor made for a memorable ride that is still a pleasure to come back to after all these years, despite its shortcomings and frustrations. Sure, it’s no grand 40 hour RPG or an epic Prince of Persia, but back then this farfetched story of a typical little boy captured my attention and still manages to hold a place in my gamer heart.

PROS
• Characters were easy to relate to and generally likeable
• A classic, cartoon-like appeal
• Dialogue is well written
• A ridiculous plot, whacky humor and hidden adult jokes
• Decisions you make during the course of the game can affect opportunities later

CONS
• The intractable objects are usually pretty obscure, making it difficult to solve puzzles
• Actions or interactions you’d expect to be able to make are sometimes unavailable for no given reason, such as speaking to your family at the dinner table.
• Multiple solutions to each situation lessens as the game progress, making it feel increasingly linear
• Sometimes the plot gets TOO ridiculous
Posted by Unknown at 6:38 PM